A Blogtoberfest Guest Post by Max Hartshorne, editor of GoNomad.com 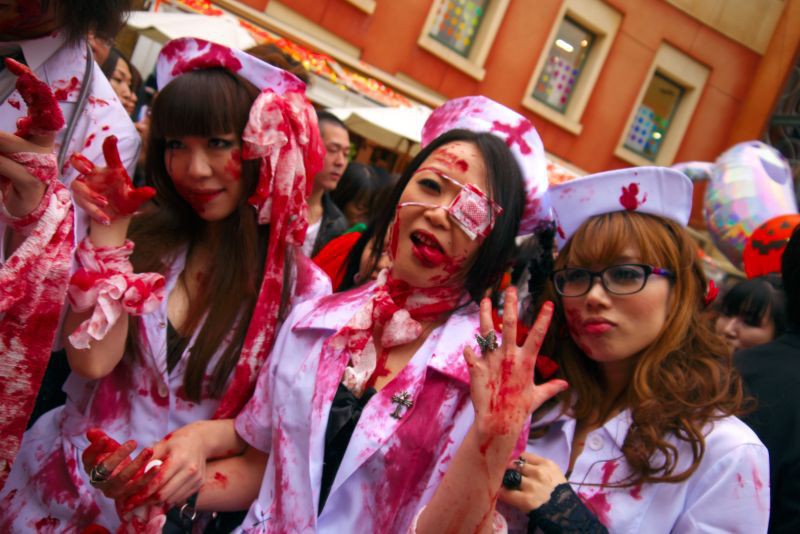 I arrived in Japan on Thursday, and here are some of my observations so far after touring around Tokyo, and a town in the suburbs called Kanto. First, Japan is crowded, it becomes the most clear when I stood at an intersection in the Ginza district and the sea of humanity crossed four sidewalks in unison.

A sea of black heads all around me, and again I felt this when we strolled down a narrow shopping street, packed in. Good thing most Japanese I’ve met and interacted with are polite.The country is very interested in Halloween. I saw many, many Halloween displays in shops in Tokyo, with house decorations and costumes for sale.

Every morning I’ve woken up at around 6:45 am, it’s always been drizzling. But not one time did the rain persist, it’s like it just starts that way and then gets nicer as the day goes on.

I was in the Edo Tokyo Museum and saw a chart that showed how dramatically air pollution has been reduced in the metropolitan area; it’s impressive.

Part of this is because every year, owners of cars here have to get them inspected, and it costs nearly $1,000.  And if you drive an older car, it costs even more!  So there are virtually no junkers driving the streets, the strict inspections makes sure of that.

Advertising is omnipresent. On the Tokyo Metro, there are decal ads on the
train windows, and every ten feet big posters drop down horizontally from the ceiling.  There is almost no more room for billboard ads on the sides, and some are video screens showing loops of ads.

People ride lots of bicycles here…not like Amsterdam, but there aren’t as many motorcycles and scooters as I thought I’d see. You can’t just park your bike, either, you have to pay for a parking space in these giant bike parking lots. Many signs warn not to park bikes. They have a bike rental system similar to NYC but all of the bikes seemed to have been in use at each stop I saw.

We dined in a restaurant that was devoted to sweet potatoes. SP wine, SP beer, SP soup, SP tempura, it was all either SP or made with SP and other things. Not that great, sorry.

We were at a food festival here, too: the food stalls had gigantic colorful signs with five-foot high photos of the steaks, long hot dogs, and other foods being grilled for sale.

Even in 2016, the number of English speakers here is amazingly low. In a sushi restaurant in Tokyo, even when I tried to ask for ‘rice’ it went nowhere. People don’t like to learn English, and there is no TV with subtitles that could teach the masses English as has been the case in Germany and Scandinavia.

Twice I checked into a hotel and spotted an ashtray—and the reek of cigarette smoke. You should ask before you check in because I had to change rooms twice after being booked in a smelly room.

The plugs are indeed American style plugs—but without the grounding pin. So your three-prong Mac cord won’t easily fit into any plugs in the room. Everywhere the plugs are two prong, and I am so glad I brought an adapter. Be warned.Young women here love wearing bobby socks. And knee socks. And big chunky shoes, or cool looking Adidas Sam Smith tennis shoes.  Men wear leather shoes, many times with pointy toes, like in Europe.  Men in any sort of a business capacity, like one of our local guides, wore a suit and tie, even though it was hot as hell.

Breakfast in Japan, even in a hotel like the ones I’m staying in, is a very Japanese menu. I’ve enjoyed daily miso soup, seasoned rice, salmon mackerel, cubed tofu, fermented vegetables and other funny looking little veggies every day.  Though many hotels have Japanese rooms with tatami mats, my rooms have been western style. But the toilets, as many people have observed, are always a little funny.

The Toto Washlet system replaces the standard toilet seat with a heated unit that acts as a bidet and a replacement for toilet paper, including a cute little graphic of a bum in the shape of a curvy ‘W” being sprinkled.

I must say that I want one for my own bathroom at  home.

I’ve been the editor of GoNOMAD.com the travel website since 2002. I travel every month and share the people I meet and the places I see right here. I am lucky to be doing exactly what I want and to be surrounded by children, grandchildren, good friends and with a good woman by my side. I live in the small village of South Deerfield Massachusetts. Follow me at twitter.com/gonomad

One thought on “Japan: Random Observations”