MANY BEAUTIFUL AND INTERESTING TATTOOED LADIES LIVE ALONG THE MOHAWK TRAIL – FROM BOSTON TO ALBANY. WE WILL MEET SOME OF THESE SPECIAL WOMEN IN A BEAUTIFUL BOOK AND TRAVELING EXHIBITION.
WE ARE SEEKING TATTOOED* LADIES OF ALL AGES, SIZES AND COLORS WHO LIVE ALONG THIS ROUTE 2 REGION.

NUDE WITH ONE GREAT TATTOO OR MANY IS OUR INTEREST. CONTACT BRILL GALLERY PRODUCTIONS IF INTERESTED IN BEING INTERVIEWED FOR POSSIBLE INCLUSION. MAYBE YOU KNOW SOMEONE? 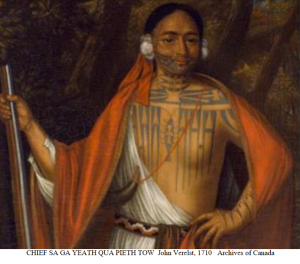 Most of the Five Nations Confederacy Chiefs of the Iroquois including the Mohawks were Tattooed as were the Chiefs of the various Atlantic Tribes. It was like their personal signatures. The above is a detail of Mohawk Chief Sa Ga Yeath Qua Pieth Tow’s portrait by John Verelst painted in 1710. Some Native American women were also Tattooed. For the first time in American history, in 2014, more women than men along The Mohawk Trail are Tattooed. Our Tattooed Ladies are a connection to this historical art form along The Mohawk Trail.

The Mohawk Trail started out as an important Indian Trail connecting the Atlantic Tribes around Boston with those in Upstate New York. In 1799, the Massachusetts Legislature established a toll road along this Path – officially known as The Fifth. Eventually, cattle were driven from Western New England Farms to the Boston Markets along this Path as were wagon loads of various goods. Horse coaches brought visitors from Boston to the Berkshires via The Fifth.

In the early 1900s, as more families owned Model T Fords and wanted to take long country drives, The Fifth began to become known as the scenic road to explore. In 1914, The Fifth was widened to accommodate the increasing number of vehicles and was officially designated as the Mohawk Trail by the State in that year.

Ralph Brill owns the Brill Gallery in North Adams, Mass. Have a Blogtoberfest Guest Post you want to submit? Email it to writerjax – at – gmail – dot – com.