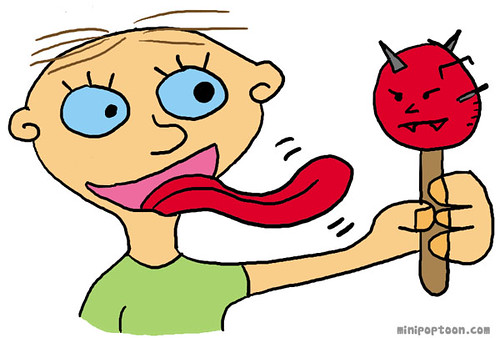 Today, most kids have everything, and a lot of them don’t know they should be appreciative for it. They have time with their parents, and have their focus, clothing, homes, food and access to technology at a pretty early age. There are a lot of kids that lack the ability to play, in fear of getting hurt. They always win and never suffer disappointment.

I know, I should’ve let go when I was too old to go trick-or-treating.

There was all of this fear propaganda in the 80’s about hippies that handed out stickers laced with LSD, they put razor blades and needles in candy bars! (the razor blade and needles thing did actually happen- I looked it up on snopes.com.) Anyway, my family wasn’t really into Halloween. My stepfather’s brother was murdered on Halloween in ’87 in Providence, and the rest of my family didn’t really celebrate it.

I always dressed up like a punk every year, or what I thought that was. I was drawn to that type of anti-fashion by eight years old. It was cheap, fun, and colorful, and I thought I was awesome. Come to think of it, the 80’s and 90’s were a mash-up of disgusting patterns, colors and VESTS. Really, everyone was in a costume for two decades.

When I was a teenager, Halloween was a tradition of petty vandalism. We’d get a bunch of plastic utensils and stick them into people’s lawns. In those scary times with the acid hippies, bad hairstyles and baggy

pants, our parents gave us the freedom to go door to door, leave the house, and make mistakes.

My first experience in Salem, Mass., I was 17 and I was with a group of friends and we decided to drop acid. I don’t believe we obtained it from hippies. We started to peak a half hour upon arrival; we were sitting on the corner of this tire place, and I watched as everything was changing, moving, breathing. This guy from Ireland was with us. He was hired to work at a motel in Hyannis that my friend’s dad managed.

We decided to go to a haunted house. I couldn’t stop laughing because everyone was really animated. I was also completely insane, in my own world having my own experience. We turn a corner, and some rubber masked ghoul thing jumps out and grabs at the Irish kid, so the Irish kid reacts by punching him in the stomach, so we were all thrown out.

The trip turned bad for me when everyone was scrambling to figure out who would be driving home.
I was laying in the back seat of some girl’s car and just closed my eyes the whole way home. It was my 2nd trip, and honestly- neither were the fun I anticipated.

The next day, the back pain and weirdness settling in- that I didn’t like the intensity of the trip, and I wasn’t the type that can live in that reality/delusion for long periods of time. It wasn’t something I wanted to do again. (even if I did.) I was just a confused kid, just trying to figure things out in the world. Feeling a little out of place in the world, yet I was so curious about the world. So, I’d seek anything I was told was dangerous, because I wanted to know why. (even if I was told.) Those were my choices.

I’ve lived back on the Cape for six years. I have not seen any trick-or-treaters. Simple fun things like that have become so regimented with Nazi-esque curfews and scheduled play dates with other doting helicopter parents.

Perhaps the parents of today were reckless and criminal at their age, like I was, and they don’t want their kid to get the candy bar with the razor blade or the LSD. I know, it’s your job to protect them, but acid hippies aren’t wearing a special costume to let you know, and they probably don’t use social media.

I think about what it must be like to grow up in today’s stifling world. Growing up with technology, a wealth of information and distraction.

So, the more we read about mass murderers, abductions, rapists, etc. the more fearful and inward we turn. When in reality, all of these things were happening when your grandparents were children.

I’m not saying let them drop acid or take candy from the creepy guy in the van. I’m saying stop policing, scheduling, or taking away kids fun over fear campaigns and your own personal attachment to making sure they always make the right choice. Avoiding everything that may hurt is a stagnant life, and a fearful life. How does a person pick themselves up after a fall and shake it off if you’re always there to prevent it, and how does a person truly have fun when everything is about being controlled, repressed and monitored?

Halloween is supposed to be fun for kids. They can be whatever they’d like for a day and get to eat tons of candy and have fun with their friends. I’ve heard some schools don’t even have Halloween parties anymore. Maybe those people are those hippies that put razor blades in candy bars.

I will always take candy from strangers on Halloween. (especially the ones that leave a bowl of it outside.)

Sara Wentworth is an artist based on Cape Cod. She and her husband Adam are the crazed minds behind Secret Society Art.

One thought on “Taking Candy From Strangers”