Whisky is a spirit suited to a number of occasions, so as the winter months approach the character of your dram might change as well. Light, fruity, floral whiskies like Glenmorangie and Cragganmore are superb drinks to hold during a warm summer evening on the porch.

But as the leaves turn, then fall, and the winds carry air from cold and distant climes to our small New England villages, we traditionally turn to food and drink that provides a feeling of warmth and comfort. Spiced breads, warm pies, mulled cider, apple sauce, cookies, beef cooked slowly with rich sauces. As our tables amass with these rich, flavorful dishes, our beers and cocktails follow suit. A pilsner gives way to a dark lager, breakfast porters appear, and the indomitable stout satisfies the bite of the cold and pang of hunger. This season calls for whisky that can stand up to such powerful flavors. And some of my favorite Scotches are naturally suited to autumn in New England.

Such whiskies are not for the faint of heart. High octane, heavily peated, and often of an aroma detectable to fellow carousers across the room, these drinks require some time and patience to appreciate. Single Malts, by far and unfortunately the most expensive bottles of alcohol, do take the most time to age to a point of palatability. But, when they reach that point, the whisky has matured to a distinct and inimitable character that, to be experienced properly, requires conscious drinking and respect for the dram.

The reward for such excellent drinking is two-fold. The first is the great gift of flavor, the primary attention paid to a dram by any whisky enthusiast. Flavor consists of a myriad of aromas, tastes, and palatal sensations that rise up, develop, and take a great amount of time to subside. What’s more, these sensory impressions are closely knit with our memories. At this nostalgic time of year, it is a healthy exercise to think back upon our experiences with friends and family while we share a glass or two of whisky, and allow the remarkable flavors held within the dram to bring to mind images of erstwhile seasons.

A great gift to the scotch drinker, particularly, is the special warmth that a fine measure of well-aged Single Malt instills within one’s breast. This auxiliary benefit is distinguished from the parallel effects of other adult beverages in that its grasp is both noble and brutal. Where wine ushers warmth and relaxation, and beer joviality and mirth, Scotch whisky makes light of trespasses and opens the floodgates of repressed expression. You can learn a lot from someone from what they drink and the way they drink it; in my experience, many great moments of triviality have been shared amongst family and friends as we neared the end of the year, and the bottom of a bottle of whisky.

In Scotch, savage flavors are refined through the chemistry of distillation. Even so, uisce beatha, the water of life, lives a life of its own. The seed of the barley plant is turned to a grist, fermented by living organisms, and rises as transitory ether. This, the very essence, the spirit of whisky, is collected and condensed. From this only a part of the ferocious and wild liquid is selected to be housed and aged in charred casks made from great white oak trees. Time and seasonal change beget character – and ultimately the perfect balance of flavors, known

If and when you reach for a bottle of whisky, try to keep in mind that this is one of those things enjoyed slowly. It is not for mixing, not for doing shots. Pour it into a glass, and notice how it changes and opens up like a glass of wine. Sip the whisky. Hold it in your mouth. Let the burn remind you that you are not invincible to the alcohol; only allow it to break your resistance to the reasonable degree. Your thoughts become more fluid, music more pleasurable, and the ideas of your present company become more accessible, your conversations more fruitful.

If you happen to be drinking whisky, there is an off-chance that you encounter a snob. Beware the Scotch-snob. So-called “purists” claim that the whisky is meant to be drunk untouched and unadulterated. They are misinformed. If that were the case, we’d have little use for a glass.

The most important thing to remember is that whisky is about taste. If you are drinking a Single Malt, don’t add cola or some other flavor enhancement. If you desire such a cocktail, opt for a blended whisky. A Single Malt is already perfect in its own way. However, water is going to play a big role in your fall and winter whiskies. Add water to access flavors that are hidden behind potent phenols. Scotch is made of malted barley. This means the seeds are partially germinated, and the germination is then ceased by applying heat. Traditionally, heat was applied by burning peat-moss below the floor upon which these seeds “malted,” saturating them with phenols. These chemicals are carried up with the alcoholic vapors during distillation. The result is a smoky scotch, and though they are an excellent source of flavor, it is worth your time to explore the other flavors by reducing the alcoholic content and reducing the intensity of the smoke.

Last October, I had the opportunity to taste an inexpensive Scotch that was delicious and struck an excellent balance between youthfulness and maturity,slightly smoky, and ideal for someone who has absolutely no idea what I am talking about, but will take my word for it and try some Scotch while their kids go out trick-or-treating:

Nose: Surprisingly complex, given the modest cost. Immediately smoky, more campy than pungent like Islay smoke. A balance struck between the benefits of a relatively young whisky and the influence of oak. Musk.

Finish: In line with the nose and palate. Pleasant, not drawn out, but satisfying.

– I really love this whisky. It’s remarkably smooth, very flavorful, and underrated in its smokiness.

– An excellent Scotch for people who are curious about trying it, and for sharing with friends.

If, on the other hand, you know exactly what I mean when I say that scotch is just right for the nippy weather, and if you are in no way afraid of a little flavor, then I suggest: 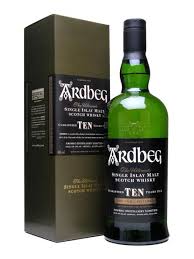 Palate: Sweet activity at the front and back of the tongue, very phenolic. A light juiciness rounds out the palate, and you get powdered sugar with white fruit flesh. Benefits from being held in the mouth, wrestling with it. The drinker is rewarded with explosions of flavor: mulling spices, maple, apple cider and pickled pears. Seems to be a whisky in transition; moving from peaty to fruity. Pear again. Buttered toast, apple-cinnamon. Touch of clove.

Finish: Long. Molasses, warm caramel. A little numbing; for an aggressive whisky, the finish is medicinally soothing. A woolen blanket after a cold wet day outdoors. The sap of a maple tree.

Additional Notes:
– I was especially interested in comparing Ardbeg with Laphroaig. Talk about to totally different experiences. When I consider the celebrity of these two malts, I wonder how many people actually have tasted both and realized the opposing character of each.
– Ardbed in the fall, outdoors and with activity
– Laphroaig in the dark long nights of snow shrowded winter
– As far as the 10 year olds go, my vote on taste to Laphroaig, but my respect to Ardbeg for their pure unadulterated whisky.
– Most importantly, what these two whiskies have in common reaffirms the theory of terroir. As they are heavily peated, these whiskies share a relationship with the same kind of smoke. Definitely distinguishable from the peat of other regions, such as Orkney.

Tom Sitzer is a communications specialist and project manager based in the Berkshires of Massachusetts. He blogs at The Scotch Hobbyist Review... about scotch.

One thought on “Whisky Weather”