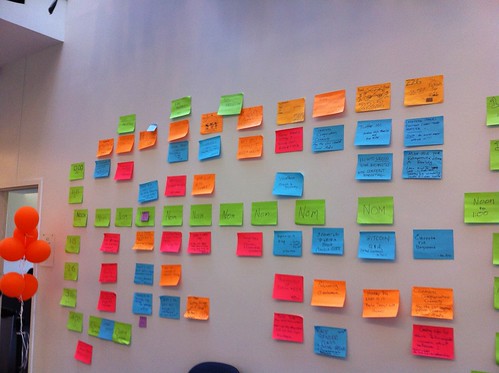 It always takes me too long to write a post about PodCamp Western Mass.

We just put our sixth camp in the books this past Saturday, and I’ve spent the last few days mulling over the new things I learned, poring over posts, photos, and emails from other campers — some I’ve just met, some old friends — and generally glowing over the awesomeness of this event.

It’s truly one of my favorite days of the year, like Old Home Days with an extra-healthy educational and social component. I’m not one to overstate how great something is unless it’s warranted, and also not one to stay involved with something once it’s run its course for me. So, six years after signing on to launch PCWM along with Morriss Partee and seeing it evolve (this year under the lead organization of six-time camper Kelly Galanis, in her flame-haired glory), to be this jazzed about something and already looking forward to PCWM7 proves we’ve hit on something special.

Each year, PodCamp has offered some comfortable consistency along with welcome changes each time we’ve convened. It’s steadily gotten larger, for one, attracting seasoned campers along with first-timers who have no idea what they’re getting into, but jump in anyway. The t-shirts we give away look similar to those of previous years, but this Saturday session, listed more sponsors than we’ve ever had before on the back. The ‘Twitter Fountain –‘ the real-time flow of Tweets projected on the wall of the main room — was replaced this year by Eventstagram, projecting photos and videos of the day as it happened.

After check-in, opening remarks, and cups of coffee and muffins, everyone was sent to the evolving agenda board to see what sessions might be offered and also post what they wanted to learn about. Damn if those giant Post-its aren’t a thing of beauty every year, stuck to a random wall pointing people to various classrooms.

Another difference for me at PCWM6, compared to previous years, was that I decided not to present. Instead, I decided to use all of my time to attend other people’s classes, and I’m glad I did — I didn’t miss nearly as much that I wanted to see and was able to focus on the lessons at hand instead of thinking ahead about my own Powerpoint slides and bullet points.

That said, here are some of my thoughts from each session I was able to catch:

This was a session after my own heart — discussing various journalistic and editorial skills that can, and should,

be applied to content creation and curation on the web. It’s not about having the most followers, the most Tweets, or the most photos posted on Instagram — it’s about the quality

of what you’re posting and how well it resonates with your core audience, whether that audience is ten people deep or ten thousand. Jon is the co-founder of another excellent nonprofit group in our area, Hidden Tech, marking one of many crossovers with other groups I noticed throughout the day.  Here are some of my favorite soundbites from the class… I plan on looking more deeply into the idea of ‘Design Thinking.’

Branding to Change the World with Chris Landry

This session looked at how all brands need to clarify their true message — what their mission is, what they’re really selling, and to whom — to succeed in today’s business climate. Chris works extensively with nonprofit organizations, but the lessons apply to any business: no matter how many marketing dollars you spend, they’ll

be worthless if you’re not listening to and communicating effectively with your customers. It’s also key to define your niche and who it benefits, revisit what you’re putting out into the world frequently, and make edits as needed. The two big takeaways for me during this class were how nonprofits especially might talk to their audience in better ways (ever given $10 to a cause only to be thanked with an invitation to a $500 gala?) and how marketers can ‘brand for good’ without going to one of two extremes: depicting a utopia where everyone is happy and prosperous, or conversely, a distopia of starving children and wasteland. For the majority of us, the reality lies somewhere between the two.

This was a session I was particularly jazzed to attend because I use email marketing with a couple of clients regularly, and not only was I in search of some best practices tips, I also felt like I might gain some ammunition on some of the points I’ve been trying to convince them of (i.e newsletters need not be novellas).

Thankfully, that’s just what Liz provided: Advice and stats to back up the notion that e-newsletters should be brief, to the point, and offer something to the reader, whether it’s a discount or a tidbit of information. She also offered some great reminders: 51% of us are reading newsletters we receive in our email on our mobile devices, for instance, so the amount of scrolling a reader needs to do amounts to how many times they have to touch the screen with their finger; brand consistency with use of colors, logos, fonts, etc. is important and easily achieved (try colorcop.net to match web colors with print colors), and a good baseline for a subject line’s length is five to eight words or 40 characters.

The Psychology of Social Media with Jennifer Williams

I was glad to see Jennifer revisit this popular session from last year, because it was one of the few that I missed and 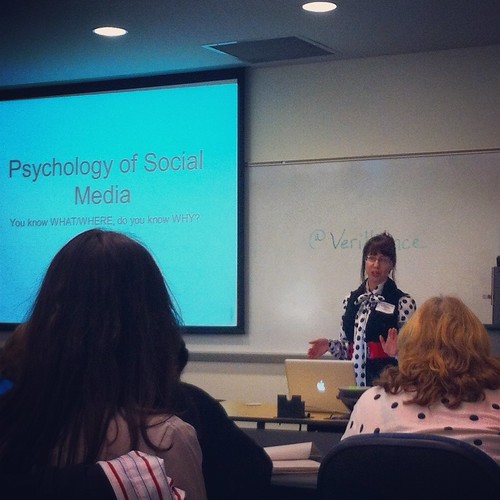 everyone was buzzing about it. The crux of the class was to get a grasp on the different ‘mindsets’ of each popular social network first in order to best use them as tools. For instance, Facebook asks us to answer the question ‘Who am I?’ with our posts. Twitter asks ‘Who am I right now?’ and Pinterest asks ‘Who do I want to be?’ in an aspirational way. Knowing what questions the networks are asking, figuratively, helps us know what to post and how… answering the question ‘Who am I right now’ might work some of the time on LinkedIn, where the question being posed is ‘Who am I professionally,’ but it’s not a slam dunk and can sometimes even backfire.

Jennifer’s session also offered a lot of tips about specific networks to build on this psychological base… posts with a list or strong visual component do particularly well on StumbleUpon, for example. Google+ is one of the few social networks more dominated by men than women. The average sale on Facebook, based on mentions of a product, amounts to $54. All helpful tips for individuals and business users.

The final session of the day for me was a roundtable (or, in this case, round-floor) on social apps, particularly those that are lesser known or more popular among teenagers and tweens. These kinds of apps are those that often come out of nowhere to lead a new trend, or for that matter, be purchased by Google or Facebook for 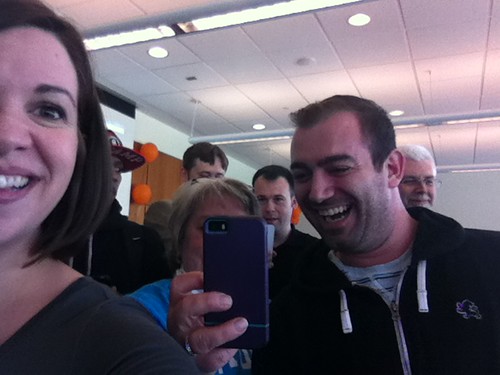 billions of dollars, so they’re important to keep tabs on. We spent a good amount of time on some of the new ‘anonymous’ apps, for instance, like Whispr and Appsecret, which let people say things without being identified — be it about a person, and establishment, or just a thought. Clearly, these apps have strong pros and cons… we’ve already seen the damage anonymity can do when it comes to bullying and ‘trolling’ online, but conversely a lack of privacy has a lot of internet users feeling weary — and wary — of Big Brother. The good news is social apps are being used for good in all sorts of ways. High school students are making their own PSAs about topics that concern them using Vine, and Snapchat (a photo-based app wherein the photo disappears after a certain amount of time) is being used to offer ‘secret discounts’ to followers of businesses, especially restaurants. 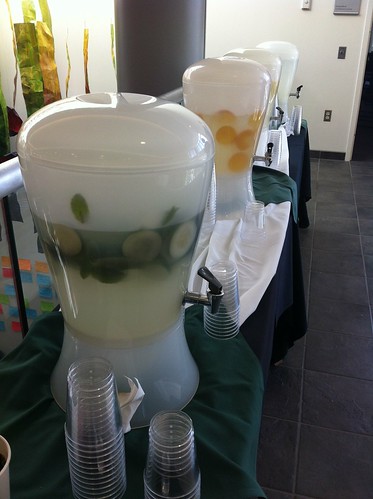 Some other perks of the day, thanks again to Kelly:

Hot Barbeque lunch for the WIN.

Flavored water pitchers throughout the day.

…I mean really; why would you miss this? See you next year!

The Power of Story