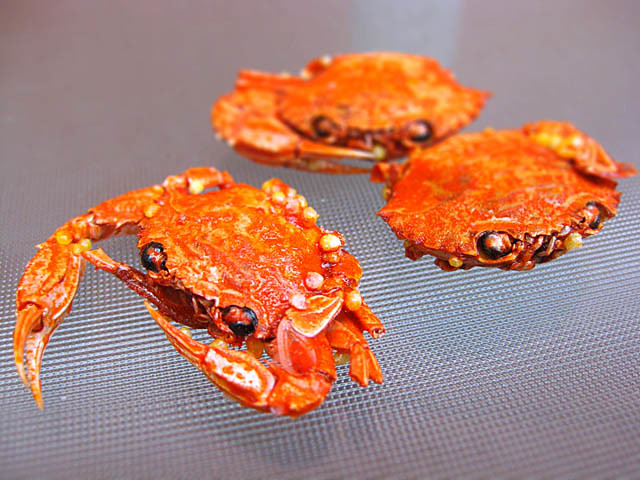 Every year, I compile a list of Octobery foods, be they weird and wacky or healthful and harvested. Each item may not be brand new, but has somehow infiltrated the headlines, and made its way to my Google-searching fingers. I’ve shied away from the Halloween-ized foods that otherwise aren’t so different from their year-round counterparts, like orange donuts and boo-ritos. Below, though, you’ll find some foodie finds, fast-food anomalies, and slightly scary snacks culled from various places … often Japan. Read on!

1. According to The National Restaurant Association, ‘forbidden rice’ is an emerging foodie trend, along with emu eggs and black garlic. If blue tortilla chips, then why not purple rice? It may not thrill your kids when served up as a starch but it’s popping up in fine-dining restaurants all over the world.

2. Kanikko, seen above, is one of Japan’s many, many weird contributions to the global food scene. This tasty snack combines seafood and sweets in candied baby crabs, which are described as sweet, salty and “majorly crunchy.”

3. In keeping with the Japanese theme, the island-nation’s fast food chains never disappoint

this time of year. McDonald’s was first out of the gate with its Halloween menu item this season, an orange and black hamburger that’s not stomach-turning at all.

4. For the entertainer in all of us, I picked this horrifying meat and cheese platter that will leave visions of Hellraiser dancing in your head.

These are called Meatheads and are being created by slightly-off event planners everywhere… a quick image search will haunt your dreams for days.

Surprisingly, though, they’re likely to be a crowd-pleaser featuring cold cuts, cheese, olives, and hard-boiled eggs … the latter two ingredients make up the unnerving eyeballs. One website even suggests that turkey and prosciutto work best as the undead flesh.

This year, HuffPo identified 13 foods that were, or could’ve been, inspired by Dr. Seuss himself including and beyond Green Eggs and Ham. My choice for this list is number eight — spinach cake, which actually looks great. (See what I did there?)