I did something in pure service to my Blogtoberfest readers this week. I watched Hellraiser I through IV.

I’d seen the first installment, but not in a while. With all my talk of horror franchises lately, I felt compelled to give it another watch and keep going until even Clive Barker had had enough.

In some ways, Hellraiser holds up; it’s not the effects, though those did stand the test of time longer than many horror movies of the eighties. It’s not the acting either, or the setting…but the core story is still a good one and the monsters, the Cenobites, are still unlike anything we’ve seen.

And here’s an interesting tidbit: Hellraiser was actually born first in literature, like The Exorcist and Rosemary’s Baby before it. The film is based on a novella written by Clive Barker, The Hellbound Heart, which is still available to buy and is regarded by many critics as being pretty damn good, while critics of the celluloid version are fairly evenly split.

My favorite aspect of the entire first film is Clare Higgins, the British stage actress of some acclaim who plays one-part conflicted heroine and one-part villainess.

Actually, if I’m being totally honest, my real favorite part is Clare Higgins’ hair. Whether she’s killing someone with a hammer or hosting a dinner party, she has a perfectly teased, gelled, and sprayed Hockey Helmet going on that’s so impressive it’s distracting. Distractingly awesome.

Hellraiser II maintains some of the same innovative monster design and clings to the storyline like Wacky Wally to a wall. Clare Higgins is back; the hair is less amazing, but even without flesh, she fully rocks a Grecian dress and diamonds. The sequel is best viewed in tandem with the first Hellraiser, not unlike Halloween II, because while it does start to veer off into crazy land after a while it adds a few wrinkles to the plot. A doctor with plenty of ‘disposable’ patients to sacrifice to resurrect Higgins’ character from the labyrinth of hell? It moves a horror plot along nicely.

By the third installment (Hellraiser III: Hell on Earth) the series is pretty much just celebrating the fact that it’s a franchise. Pinhead – who, by now, is colloquially known as Pinhead – is ensconced in a statue for half of the film for some reason. The cast is unnecessarily huge, and yet the hooks that shoot out of the puzzle box have gotten considerably smaller. Such a torture letdown.

But, it’s fun to wax nostalgic about the early nineties with vaguely famous Paula Marshall, a sea of actresses’ eyebrows that have yet to be plucked clean, and a soundtrack that includes Motörhead, KNFDM, and The Soup Dragons. There are also a lot of chokers and chain belts.

Hellraiser IV: Bloodline was the last Hellraiser to be released in theaters and the last to involve Clive Barker in any way — there are five more after this from various writers and directors.

It’s billed as a prequel but starts in space in the year 2127…that’s less confusing than the choice to name the first female lead we meet ‘Rimmer.’ (But look, it’s Christine Harnos from Dazed and Confused! Fun!)

It’s not long before a space station commander is telling an ‘ancient story’ like he was there, and the judging by the casting choice to have him play all of his ancestors, he was. That leads into the aforementioned origin story of the puzzle box and its connection to hell… 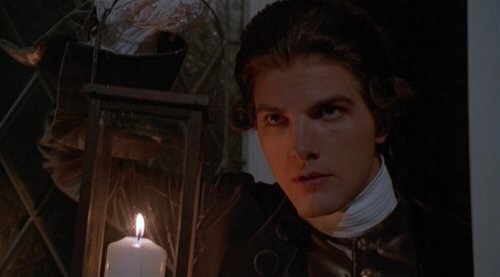 In period garb! That alone is worth sticking around for.

If you gobble up these four Hellraisers and still want more pins in the head, check out one or more of the five additional  Hellraiser films I have yet to experience – plus, rumors of a remake of the original are here and there, so there’s still hope for a Higgins Hair ‘do resurrection.

All of the Hellraiser films are available on Netflix streaming.

One thought on “Hellraiser  – a horror franchise that really hit the nail into the head.”